The geographical framework of a region is closely linked to the history of its people. In this case, it gives us the keys to the events occurred in the area: you can't understand Alaró without its orography.

The town of Alaró is situated in the southern spur of the Mallorcan mountain range, called Serra de Tramuntana. An apparently calm landscape that nevertheless, is the result of a violent structure of tones of compressed rock layers. The towns standing at the foot of this mountain range, build up the county called Es Raiguer.

Alaró is defined by the silhouette given by the Serra de Tramuntana, but as it advances to the south east, it softens forming a valley that merges with the plain. Two elevations define the town: Puig d'Alaró (825m) -also called Castell d'Alaró- and Puig de s'Alcadena (817m).

Their disposition produces a particular optic effect: a mirror that reflects one elevation in front of the other, separated by a longitudinal knife cut, where the stream Solleric rushes down. It is undoubtedly one of the most magic and beautiful landscapes of the county 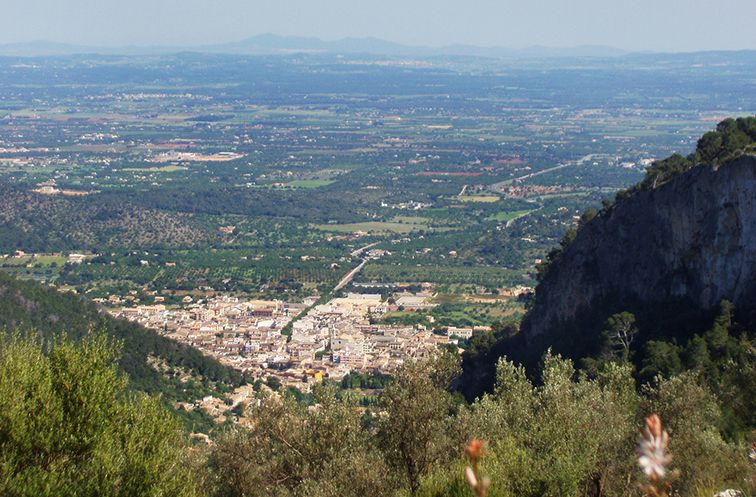 The town has an extension of 4570 hectares and limits with the municipalities of Escorca, Mancor, Lloseta, Binissalem, Consell, Santa Maria and Bunyola. This numerous neighborhood is explained in part by its elongated form -the town is born in the mountains and extends downwards into a valley-, but also by the secular dismemberments of Canarossa or Qanarúsha, a district result of the initial division of the island after the conquest of Jaume I. Mountains define good part of the municipality, although the southern area of Alaró, plainer and cultivable, is where people live and work. Nevertheless, part of the urban growth of the past years seems to cling to the foot of the wild northern orography. Oak woods, pine forests and scrubland build up the vegetation of the place, while the cultivated areas are dominated by almond, carob and olive trees. 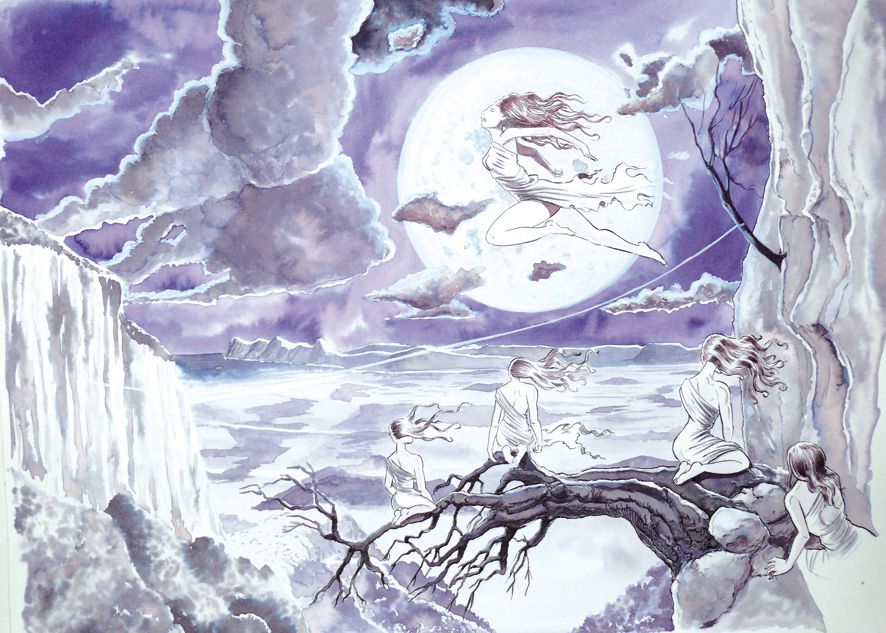 The witches of s'Alcadena and the Castle

These two summits, so similar between them and inaccessible due to their high rocky walls, have inspired popular fantasy. Sometimes, it was Saint George or the Catalan king Jaume I jumping with his horse from a summit to the other, in other opportunities, witches or Moors joining s'Alcadena and the Castle with bridges.

It is told that before witches strolled relaxed around the world. The ones who lived  nearby Alaró, met on Saturday nights at the summits of Puig de S'Alcadena and Castell d'Alaró. They carried strings with which they set a bridge between the two mountains and during the night they rested and also did a lot of witch crafts that it is better not to know, until dawn came, when they went back to their hiding place, like owls do.

Population settlements have been always conditioned by water supply. Hydrography is basic to explain the expansion or stagnation of towns and cities. In Alaró, the fountains of Ses Artigues and Sa Bastida are known since yesteryears with numerous documents noting their existence and even documenting their water flow. Alaro's water has supplied population with consuming water, orchard keepers with irrigation water and millers with an energy resource. But times have changed and the fountains of town have been channeled or bottled for commercializing. Water supply for the population comes now from wells. Regarding the fountain of Ses Artigues, its administration is in hands of the irrigation Community and if before it had different uses, today its flow volume is mostly used for irrigation. Other fountains have bottled their water too. In 1964 facilities were built to commercialize water from the Fountain of Sa Bastida (335l/h) and later, in 1988,  water of son Cocó from Font Sorda (21001/h) in Clot d'Almadrà was also bottled and commercialized.

Alaró belongs to the unique Mediterranean climate. Characterized by its stationary rains -about 40% of the precipitations are concentrated in autumn- and irregular rainstorms from year to year. Precipitations increase when closer to the mountains, meaning that Alaró registers annual averages of 800 mm in the high points, while in the low areas it arrives to 600 mm. Sporadically, during cold winters, these precipitations fall in form of snow. Temperatures belong to a mild climate: soft winters with dry and warm summers.

The average annual temperature is around 15 ºC with maximum averages in summer of 30ºC and minimums of 6º C in winter. These mild temperatures have a close relationship with the sea enveloping the island: the Mediterranean Sea procures mild temperatures in winter and the blessing of embat in summer: fresh sea breezes that enter the land due to the land-sea temperature contrast.